Narrow your results by:

Plaque inscribed; 'This Hall was erected in the Sixtieth Year of the Reign of HER MAJESTY QUEEN VICTORIA. Edric Bayley Chairman of Governors.' 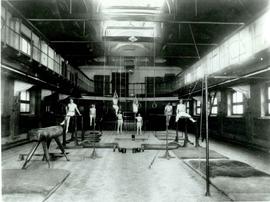 A photograph of men using the apparatus in the Victoria Gymnasium.

Vietnamese in UK - Fifteen Years of Settlement, Occasional Papers in Sociology and Social Policy No. 2

View looking east down Keyworth Street with the Technopark on the right.

View down Keyworth Street, looking towards Newington Causeway with the Faraday Wing on the left.

View looking east down Keyworth Street with the Technopark on the right.

A photograph of Keyworth Street taken from the corner of Ontario Street looking towards Borough Road. The building on the right is the George Overend Building, which was demolished in 2007 to make way for K2.

View from back of Borough Road building down Thomas Doyle Street

View from back of Borough Road building down Thomas Doyle Street.

Main building in view is the Keyworth Centre

Shows part of Technopark (the central building with red piping) and the Keyworth Centre (on the right).

View from Tower Block looking north towards the City.

View of the Terraces from Borough Road