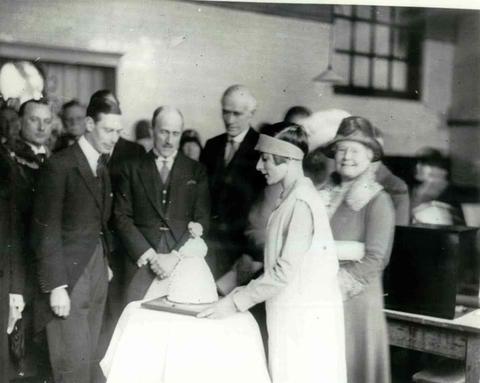 Visit of the Duke of York

On 20th February 1930 the Duke of York (the future George VI) visited the Borough Polytechnic Institute to official open new buildings within Borough Road Building and unveil its new facade.
As part of the Duke of York's official opening of the remodelled Borough Road building he toured the classrooms and laboratories of the Polytechnic. The girls Trade Cookery School made a Geonese layer cake for his daughter Elizabeth in the shape of a doll. The crinoline part of the cake was composed of over 2000 iced rose petals and the cake was presented by Miss Patricia Symonds, aged 15.

A photograph of the Duke of York being presented with a doll-shaped cake made by students at the National Bakery School.