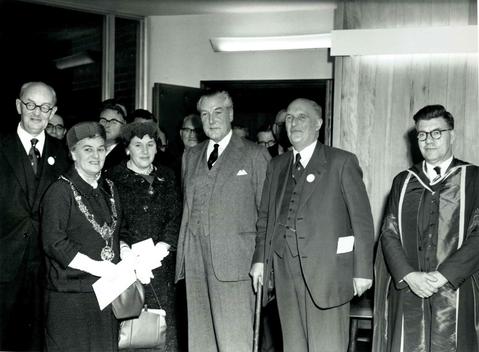 In December 1945 the Education Board for the Heating and Ventilating Industry set up a committee to look into the possibility of establishing a National School for the Heating and Ventilating Industries. This was in response to the Percy Report which recommended that National Schools associated with certain industries should be established. In 1946, with the agreement of the National Association of Heating, Ventilating and Domestic Engineering Employers, discussions were opened with the Ministry of Education on the establishment of a National School. These proposals were well received and in January 1947 a memorandum, drawn up by the Ministry on National Colleges, and financial arrangements were discussed by the Ministry and the Board. It was agreed that Industry should pay £50 per student per session with a guaranteed minimum of £1000 per year. The National Association also agreed to this and in April 1947 it was decided that a National College for Heating and Ventilating, Refrigeration and Fan Engineering be formed within the Borough Polytechnic. The agreement of the London County Council was secured in November 1947 and the first meeting of the Board of Governors of the newly established National College for Heating, Ventilating, Refrigeration and Fan Engineering was held on 20 January 1948 at the Borough Polytechnic.The first Chair of Governors was Hubert Secretan and there were representatives from the three industries on the Board of Governors. There were high hopes for the new College and the third annual report of the Education Board for the Heating and Ventilating Industry hoped 'it will be the centre for the highest grade of technological training for the industry and will be in close contact with the most up-to-date development and research' (NC/7/2/3). The College existed to meet the needs of the industries and had two principal aims: to provide a high standard of technological training and to undertake research.In its first session, commencing in September 1948, the College offered full-time Diploma courses in the three industries: Heating and Ventilating Engineering, Refrigeration Engineering and Fan Engineering. The College also offered part-time day or evening refresher courses for those employed in industry. Courses led to diplomas after full-time study for two terms, and later one year, or an Associateship of the National College with post graduate or post HND entry.The College was, from its inception, closely linked with the Borough Polytechnic. Its premises were located within the grounds of the Borough Polytechnic Annexe and the College used the facilities of the Polytechnic for teaching ancillary subjects. Before the National College was established the Polytechnic had become the principal college in heating and ventilating engineering in London. A lecturer in heating and ventilating engineering had been appointed in 1917 for evening courses and after World War 1 part-time day classes were introduced. At first, the college was heavily dependent on service teaching from other departments of Borough Polytechnic, especially mechanical engineering, mathematics and humanities, but began to widen its work by undertaking research.The College was given a logo of a shield divided into four, representing the three industries and the Borough Polytechnic. It also had a motto, 'e tribus unum', meaning 'one from three'.In the 1950s the accommodation within the Borough Polytechnic was too small to allow the continued expansion of student numbers and to undertake research. The Ministry of Education agreed to cover the costs of the building and industry donated money to purchase new equipment. The new building on Southwark Bridge Road (now the Faraday Wing) was opened to students in September 1960.By the 1960s government policy had moved away from National Colleges which taught a limited syllabus. The Ministry of Education preferred Technical Education Institutions to provide a broader education than covered by the National Colleges and in 1964 it began discussions with the National College on its future. Due to a Government White Paper of 1966 entitled 'A Plan for Polytechnics' it was proposed that a new Polytechnic should be established by merging the Borough Polytechnic with the National College, Brixton School of Building and City of Westminster College.In September 1970 these four colleges merged to become the Polytechnic of the South Bank. In effect, the National College became the Polytechnic's Faculty of Environmental Science and Technology.